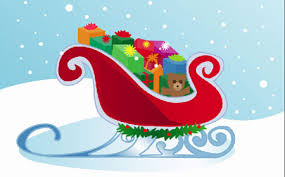 So I was driving down the street in my UPS truck one afternoon in November when a man in a large red truck flew by me, slammed on his brakes, and stopped his craft diagonally in the middle of the street. Before I even had time to stop my vehicle he jumped out into the roadway and started running towards me. He was surprisingly fast considering his hefty girth, red furry outfit, and rather excessive quantities of facial hair. Once he arrived at my passenger side door he looked at me with an odd sense of clarity and focus and yelled, “Omar– it is me, Santa Claus, and I need you to save Christmas!”

“What can I do to save Christmas?” I asked Mr. Kringle.

“This is a little bit embarrassing,” Santa explained, “but I was online the other night and apparently I downloaded a virus on my business computer. It scoured my files for personal information and found the title to my magic Christmas sleigh. I don’t understand all the details, but before I even knew what happened someone had dispatched a specially equipped tow truck to the North Pole to take possession of my most important piece of Christmas equipment. The driver sympathized with my situation but insisted there was nothing he could do since all the paperwork was all in order.”

“That’s not good.” I replied as I realized how stupid and obvious that sounded three seconds after the words left my mouth.

Santa looked at me like that was the most stupid and obvious statement that I could have possibly made at that point in time. Then he took a deep breath and explained how I can help him remedy the situation.

“I went to the North Pole legal department and they did a complete investigation. It turns out that my sled is being stored in a holding facility. If I can’t come up with the payment in the next thirty days the vehicle will be legally transferred to the Russian mob.

“But how can I help? I’m just a UPS driver.” I explained. “How much money do you need to get your sleigh back?”

“That’s the problem Omar. They don’t want money. The only way I can get it back is to give them THE GREATEST CHRISTMAS LETTER EVER WRITTEN! I looked online and I’m impressed with your archive of Christmas letters going all the way back to 1995. But you need to step up your game this year or the holidays will be ruined for the entire planet.

“I’ll get right on it.” I told Santa. “Just let me finish my deliveries, do all my pickups, drive the truck back to the center, unload my air and international packages, park my truck, turn in my paperwork, punch out, drive home, take a shower, eat dinner, play with my kids, and then I’ll get right on it.

While I was saying all of that, Santa had already walked most of the way back to his truck. He looked back at me as he climbed into the cab and yelled “I’m counting on you, Omar!”

Later that evening I sat down at my laptop ready to write the most important story ever with my usual writing aids that included a “party size” bag of Wavy Lays potato chips, a cold two liter bottle of Diet Pepsi, and three full boxes of Sweet Tarts. I fired up my “inspirational Pink Floyd” playlist and went to work. I wrote an amazing letter. It was concise yet detailed, funny yet touching, and inspirational yet not preachy. I was all ready to email it to Santa when a somewhat suspicious Russian mobster looked in my kitchen window. He picked up an unusual piece of electronic equipment. When he pressed a prominent red button on the top of the device all the electronic devices in my house stopped working. He chuckled softly, walked back to his unmarked van, and drove away. I was going to chase him, but I was busy injecting insulin into my body as this writing experience had apparently given me type one diabetes.

So this is not the greatest Christmas letter in the world– this is just a tribute.

In my world 2013 will be remembered most as “the year Omar got his own route at United Parcel Service.” I had spent the previous nine years as a swing driver doing other driver’s routes when they were on vacation or injured. While I enjoyed it for the most part, there are some definite benefits to having a set route. Here, in no particular order, are some of said benefits.  Customers miss me when I’m on vacation. I can tape up photographs of my family on my visor. I don’t drive around looking for addresses. My truck is an automatic. So if you live or work in the area west of I-25, east of Timberline, south of Horsetooth, and north of Harmony in Fort Collins and you order a lot of shoes from the internet you should be expecting to see quite a bit of me in the future.

This year we decided to tackle remodeling our kitchen. We spent the previous weekend watching HGTV and Katherine and I both felt completely prepared for what lay ahead. After ripping out about half the old cabinetry we discovered that, wow, the makers of those television shows make things look way easier than they are in real life. We also discovered that the order of certain tasks can be very critical when installing a new kitchen. For example, putting in all the new cabinets before the counter tops arrive is generally a plus. Despite numerous setbacks of varying degrees of ickyness we now have a new kitchen which suits our needs much better than the last one.  One more piece of advice for anyone considering this type of project– if you build a large island into your new kitchen it will, from the instant the counter tops are installed, act as a rare earth magnet for attracting random objects from the rest of the house. Either that or I’m getting up and moving everything on to the island in my sleep.

Finally, I thought I would end my letter with the most insightful comment from my Facebook page from the last year:  The older you get, the harder it is to be a prime number.

Snapchat, the high-tech start up that lets users transmit text messages and images that disappear a few seconds after being sent, has recently turned down a $3 billion dollar offer from Facebook. When asked for a comment on the situation a high ranking yet unnamed official at the company replied, “We believe that there is a lot more money to be made by taking all this stuff everyone thinks is getting erased and selling it to the Russian Mob.”