Notice to all Hertz rental offices in Northern California:

After a complete analysis of our operation over the past decade, we have found a disturbing trend that has accounted for a disproportionate amount of revenue loss in the Northern California division. It appears that one organization has been responsible for a vast majority of our damage claims. They have rented cars from our locations and then have returned them in various states of disrepair. Some vehicles appear to have been repeatedly parallel parked in a tight spot. Others have been returned with after-market equipment which allows the vehicle to be operated via remote control. One appears to have been retrofitted with rockets in the trunk.

Our report has found that this group accounts for 73% of all damage claims in the district and has reduced profits by a staggering 54%.  For these reasons, we are directing all employees to categorically refuse renting any vehicles to the following loosely organized group of people who often times refer to themselves as the “Mythbusters.” 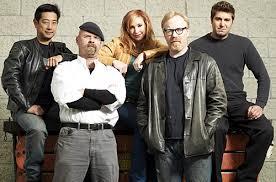