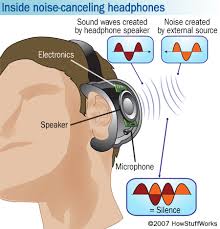 Just a quick post for some predictions on where things are headed with this whole “technology” thing.

We are going to see some new applications with noise canceling technology. Most commonly used in headphones to quiet unwanted sounds such as annoying coworkers, jet engines, and your daughter’s pet gerbil that sits in his cage as he chews up an entire empty paper towel roll one square millimeter at a time with his black beady eyes staring at me thinking “one day I’ll get out of here and the tables will be turned. Maybe not today, and maybe not tomorrow, but somewhere down the road I’ll escape from this metal cage and all bets are off.” But I digress.

So now car companies are getting on the action by using noise canceling technology to create cars that are quieter inside by blocking out engine noise. When I get a free day to myself (projected date: 9/21/2019), I’m going to install a noise canceling device in my forced air heating and cooling system. I don’t think I need to hear the big fan in the basement from every possible location inside my home.

The military could use this technology to help airplanes avoid radar. Currently they spend all kinds of money on planes that have unusual angular designs and special coatings to absorb radar waves. All they need to do is have a computer that listens for radar waves and then send back a wave that is exactly inverse to what the airplane is reflecting back to the radar station. Granted that these waves are moving at pretty much the speed of light, but with some clever computer programming it just might work. And it could save the Department of Defense a few dollars here and there.

New topic– cell phone technology. While everyone and their dog knows that computer processors are getting faster all the time (roughly doubling in speed every 18 months) a somewhat less exciting benefit is that processors are using less energy per operation. While cell phones are being developed that let people talk on the phone, watch Youtube videos, and create highly accurate models of nuclear reactions all at the same time, cell phone companies could find a new market niche for phones that use so little energy to run that the device could be powered by the movement of your body in the form of a Star Trek communicator (or maybe a wrist watch for the nerd impaired). Warning: this device should not be used for anyone who is extremely lethargic.

So that wraps things up around here. Check back in a few years to see if any of these predictions came true.